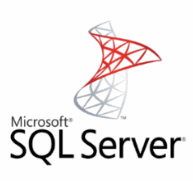 For the second part of this series, I’m relying on a TSQL Code Smells Finder hosted on Codeplex.  The solution consists out of 3 files (one PowerShell script, a text file containing a list with possible errors and a whitelist file) and build within PowerShell.

Before covering looking at the implementation, I recommend a test run using the provided test files.

Note: The TSQL Code Smells Finder project can be downloaded from the following location: https://tsqlsmells.codeplex.com/.

Start the project without providing any parameters.

If you have extracted the archive file, you will find the following items;

To initiate a test run, call the script wherever you’ve stored the files.

At this point, you should see some processing feedback within the prompt, and just a bit later, the review GUI should be popping up. The processed file selection menu is located on the left, and the list of detected issues can be found above the feedback area.

The feedback area will highlight the relevant code block, which is great for small to medium size databases. For larger databases, you might want to split the input into logical chunks or build a report based on the smells.xml output file, which contains the same information in XML format. 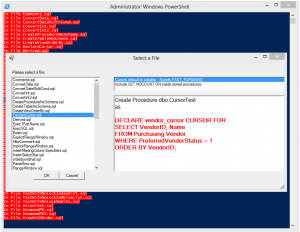 Note: The file location can be provided as an argument $FolderPath; More options and details can be found on the project website tsqlsmells.codeplex.com

I won’t cover all the details, however, I do want to cover some basics on how things setup allowing us to extend the script.

The routine Process-File is one of the main routines and the place where the file will be read and parsed. The project utilizes the TSQL110parser class, which eliminates the need to implement custom regular expressions parsing logic/drama. The parsed results of TSQL110parser already contain metadata, which simplifies the Process of detecting how many and what kind of SQL statements need to be processed.

More information about the TSQL110parser class can be found here.

Process-Statement will pass the data to a more specific function, which is where the actual validation and feedback processing will take place. You can spot the features quickly, given that they start with Process –*

And finally, Send-FeedBack, which is responsible for writing the validation feedback to the smells.xml output file. I provide the error number (corresponding with the number found within errors.txt) and the statement.

In part 3, the last part of this series, we will be adding some additional rules and see how we can extend the script.