Before we get started it’s important to know where Microsoft Azure Automation fits in the available automation options for Windows Azure.

Now at the time of writing, the Microsoft Azure Automation feature is still in beta. Therefore it’s required to enable “Preview features “as explained on this page http://azure.microsoft.com/en-us/services/preview/

Now before we can start diving in the world of Microsoft Azure Automation, it necessary to cover some basics.

Runbooks can be created from scratch or you could download and import a pre-build Runbooks from TechNet. Or by using the Runbook gallery located within the Microsoft Azure Portal.

For this sample we will create a new Runbook from scratch by clicking on Runbooks within the Microsoft Azure Automation Account page, New -> Automation -> Runbook -> Quick Create, and provide a name.

At this stage, the Runbook has been created with a default state of draft. Runbook details, including a dashboard, jobs, schedule, log settings, and the PowerShell script (author tab) can be found by opening the Runbook.

Adding automation code within your Runbook.

The process of adding code within your Runbook is fairly simple.  Start by opening the Runbook details, now open the Author tab and the Draft. At this point, you will see the default template as listed below

Given that this is just a simple introduction, I will only include some basic logging as displayed below. Implementing the details isn’t much different from accessing Azure resources via PowerShell locally.

Note: Testing a script will execute your code without any hidden safety measures; therefore resources will be created, deleted as stated within your script!

At this stage, you will be able to test your Runbook by clicking on Test. 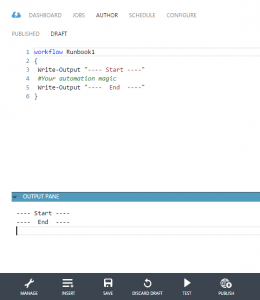 This just covers some of the basics of Microsoft Azure Automation. In a later blog post, I will cover some other aspects as the Publishing, different Assets and Scheduling